Radio Interview of a Mother & Her Son with MS

One cold night in January, I was driving home and listening to the last part of a radio interview of a mother and her son. The mother has muscular dystrophy, which is a degenerative disease of the voluntary muscles that control movement in the body. She talked about making “choices” in life. She said that everything we do or don’t do is a “choice” and has a consequence.

This mother is in physical pain much of her day. She makes a conscious choice every morning to get up, to make a cup of coffee, and to go through her day in physical pain. She said she is very aware of each choice she makes. Her muscular dystrophy is slowly worsening, but she appreciates all the medical help and medications she receives.

Her eleven-year-old son, who was born with muscular dystrophy, was also interviewed. His health and ability to live is more precarious. He struggled to breathe and talk during the interview. He had two siblings who were also born with muscular dystrophy, and they had died. The doctors told his mother that he would not make it past one year. He did. They then predicted he would die by age two. He didn’t. The doctors are amazed he has made it to age eleven. 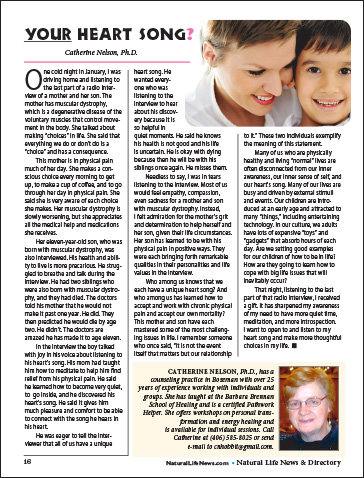