One of the Great Spiritual Teachers of the 20th Century

Of all the more recent spiritual teachers who have promoted what I consider to be advanced teachings worthy of study and application as we strive to initiate the Age of Aquarius, Omraam Mikhaël Aïvanhov is probably the least known in the United States of America, yet also among the greatest of the 20th century. Born in 1900 in an area of Macedonia that is now part of Bulgaria, he met the Master Peter Deunov in 1917 and studied with him for 20 years before Deunov sent him to France in 1937 and before Bulgaria was overrun by the Nazis in World War II. Omraam delivered over 4500 talks over the next 49 years, passing from this world on Christmas Day in 1986. His teachings were given completely orally, yet have been transcribed and translated into over 40 languages and are primarily available in book form.

The Master, as he was called after returning from a year-long trip to India in 1959, during which he was given the name Omraam, promoted a natural and practical lifestyle that is rich in spiritual practices, including silent meditation at dawn before the sunrise, a vegetarian diet, singing prayerful songs, working closely with nature, and communing with divine spirits. Among these are numerous angels, who can inspire disciples to understand the holy sciences and the arts of conscious living. His talks were sublime and poignant to meet the challenges of his time, as well as now and are replete with practical wisdom that only a true sage can deliver. 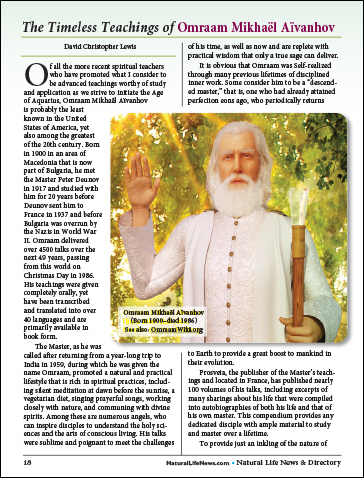