The Great Awakening and Future of ‘Normal’

Home/Current Events, The Metaphysical/The Great Awakening and Future of ‘Normal’

The Great Awakening and Future of ‘Normal’

For the last 50 years, I’ve leapt ‘ahead of my time’ pioneering the new frontier of ‘inner space’—the ‘InnerNet’ at the heart of the Internet. But this last year, the times have caught up with me. The future of now has arrived! It’s Being Called… ‘The Great Awakening.’

This ‘new normal’ is a paradigm shift—a reset of our world view. It is also known as a Dimensional Shift, or ‘General Enlightenment’ or simply, if you know your Bible, ‘Revelation.’ It’s a global rEVOLUTION (emphasizing 90% of the word).

As a visionary futurist who lectured at Buckminster Fuller’s World Game Studies Workshop in 1974—followed a few months later with an address to ten agencies of Fed-Gov on Capitol Hill — I’ve had five decades to ‘imagineer’ the optimal media, medical, and market megatrends shaping Golden Age models of sovereignty and Global Holistic Healing. 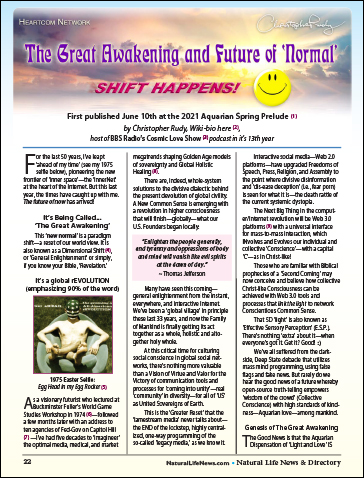