The Big Picture of the Aquarian Reset

The Big Picture of the Aquarian Reset

Aquarius Will Be Known as the Quantum Age

The Aquarian Age will be the Quantum Age. We accelerated through the Industrial Age into the Space Age, and now the Quantum Age… and we’re still wrapping our heads around that! After thousands of years traveling only as fast as a horse would go, consider how we’ve gone from horse-and-buggy to the International Space Station in about a century.

Over the last 100 years, our Solar System passed through the intense quantum light of our Galactic Plane’s Photon Belt. Just as laser light can carry thousands of TV frequencies, Earth’s quantum field has been influenced by the collective Source Field of billions of other solar systems—all in alignment with the GREAT CENTRAL SUN.

Now we are entering the Aquarian sector, and the Great Awakening in the Photon Belt has initiated global quantum reality—a ’Unified-Field Consciousness’ of HOW we are conscious via the Universal Language of Light and the Cosmic Law of LOVE. 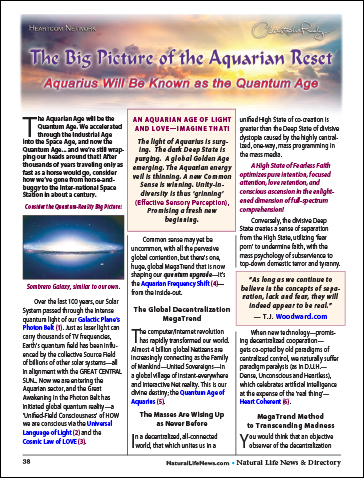