Why I Mixed in Oil of Spikenard

This past year, I moved into a new house. Finding a new home around here is not easy! My realtor eventually located a home built around 1980 that met most of my needs but did not have office space. The only possible space was the outside deck facing the mountains. I purchased the home and began my renovations, walling up the deck to create my office.

During the renovations, I wanted to use supplies that were as nontoxic as possible. I was able to purchase windows from Sierra Pacific to endure the significant Livingston, Montana winds on that corner of the house.

The ceiling and one wall were made from stucco, which we plastered with mud to have a smoother appearance. Then, we primed with white paint and painted the wall with a color called Fruit Cocktail. A friend thought it was a little loud, but when the white bookshelves go in, this will temper the color. 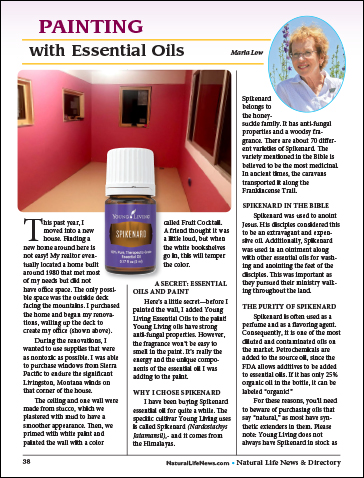