A few years ago, a dear friend sent me a pyramid made of clear epoxy resin, metal shavings, lapis stones and a quartz crystal that she bought at a gem show. I did not know what it was, but I regarded it as new age artwork at the time. I placed it in front of my computer monitor so that I would notice it each day and send thoughts of appreciation to my friend.

I then began to notice that I was sleeping very deeply through the night, despite decades of insomnia. I also noticed that the stream of thoughts and emotions which I experience “from humanity,” but which are not my personal thoughts and feelings, was dramatically more quiet and peaceful. This continued for weeks but I did not know what had caused the change. About 3 weeks later, a co-worker made a casual remark in an email about “orgonites” and I immediately Googled it. I discovered that the little pyramid I had received was an orgonite, and the shift in energy in my living space started with and perhaps was even caused by the pyramid. 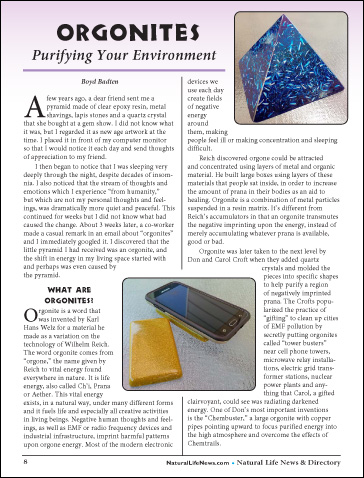