Is the Keto Diet Right for You?

Home/Fitness & Nutrition, Natural Therapies/Remedies/Is the Keto Diet Right for You?

Is the Keto Diet Right for You?

The picture on the left, above, shows me at my heaviest (230 lbs.) in 2001. I was 43 and miserable. I had tried almost every diet that came along. All of them were some version of a low fat/low calorie diet. All seemed to work initially, but none lasted long term. In about 2002, I discovered WestonAPrice.org and was shocked at their message that FAT does not make you fat. I adopted a high-fat, whole-food diet. Many of my physical aliments disappeared, but after about a year, my weight loss stalled. I then learned about the low-carb, high-fat approach, and then I discovered the Keto Diet.

I was probably a diabetic for many years, despite being told by my doctor that I wasn’t, as my labs were “normal.” I was unfortunately told for many years by doctors I trusted that, “I just needed to eat less and exercise more.” I now know this is very bad advice. I’m still a work in progress, but I feel fabulous at 60, and much “younger” than I felt 30 years ago! 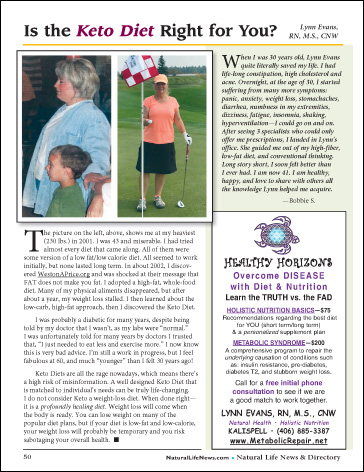