In this issue, I want to tell you about an herbal formula that will help you fight colds, the flu, and other viruses. In previous articles (archived at NaturalLifeNews.com), I wrote about Garlic, Mullein, Licorice, and Lobelia, all of which are in this formula and more herbs as well. When I was raising my children, they would occasionally get a cold and even more rarely, the flu. They would hate getting sick and would oftentimes tell me they weren’t—even though they were hot, and well, a mother just knows! That was because they knew the protocol would be swallowing minced garlic with juice or water. I would also give them a formula that had Echinacea and Goldenseal. As they got older, I changed up the protocol to the garlic immune extract and a formula that would stop their coughs dead in their tracks. It was so much more effective, and the colds and flu came much less often. 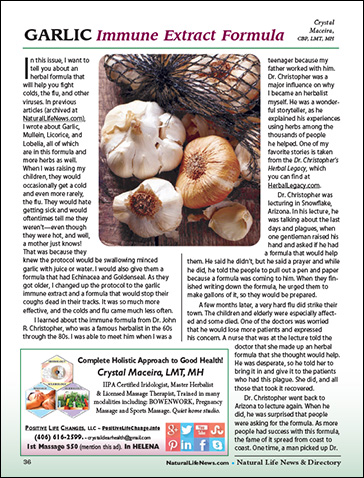