“There is not a tumor on God’s green Earth that cannot be licked with a little baking soda and maple syrup.” —Jim Kelmun

LLong about February of 2018, I had a large lump in my chest so I went over to the VA hospital in Helena for a biopsy. The surgeon said he would let me know. I then did the maple syrup and baking soda routine described here. After about two weeks, he called and said he wanted to do another biopsy. I told him there’s no need because the lump is gone now. After two more of my friends died of cancer,
I made copies of this newsletter and started asking around, “Do you know anyone who’s got cancer?” The answer was almost always yes, so I’ve been handing out this information since then.

I mentioned it to a fellow named Jay who had stage-4 colon cancer. He went out and got the 100%-pure maple syrup and the aluminum-free baking soda. After about three weeks on it, he went back to the doctor who said, “I don’t know what you’re doing, but keep doing it, because your numbers are way down.” A friend named Terry also had colon cancer. After a while, I was meeting a mutual friend for coffee, who told me, “Terry wants you to know he’s doing fine and says, ‘Thank you, thank you!’” 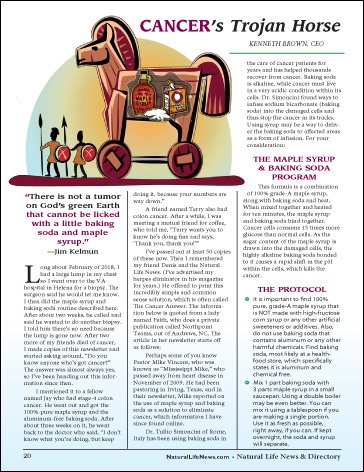