Bowenwork has been used in Australia for over 60 years. Insurance companies there pay for treatments, because they have found that it is 80% effective for treating pain and other issues in the body. In this article, I will explain more in physiological terms of why Bowenwork effects such changes with only minimal pressure. (More information about Bowenwork can be found in my May–June 2018 article, archived at NaturalLifeNews.com.)

While I was still in the learning process, I had a client who had Parkinson’s that came to me for massage. He agreed to let me “practice” Bowenwork on him, so I could get my “hands on” training certification. He had stage 4 Parkinson’s, which made it difficult for him to get around. Besides the obvious tremors, he indicated that he didn’t sleep well, had no energy and had a significant amount of pain. Within three treatments, he was pleasantly surprised at the results. He was sleeping better, had more energy to do some projects around the house, and he was in less pain. We did a few more treatments, which increased the benefits. When he expressed his delight with his doctor, she wanted to learn more about Bowenwork. 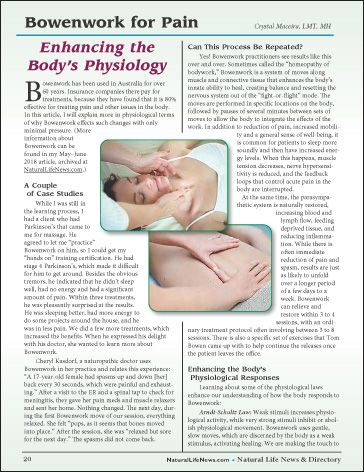