A Past-Life Message to Humanity—

A Past-Life Message to Humanity—

Letting Go of the Stories of Our Past

During a recent Quantum Healing Hypnosis session, a female client viewed a past life as a medieval soldier. The man’s name was Banyon, and he was incredibly strong and courageous. He exuded confidence, as he confronted a mad king about the impending fall of his kingdom due to the dictator’s own greed, gluttony, and incompetence. As conquering forces encroached the village, Banyon led the townsfolk to safety and left the king to his demise.

Years later, Banyon, living peacefully in a small mountain cabin, was approached by the soldiers of a new king. They asked him to fight for them, as his valor in battle was renowned throughout the land. Once again, Banyon displayed his confidence, as he spoke with this new ruler and declared that he would only lead the soldiers of a monarch who put his subjects before himself. Only after the king proved himself to be loyal to his people did Banyon go to fight for him. 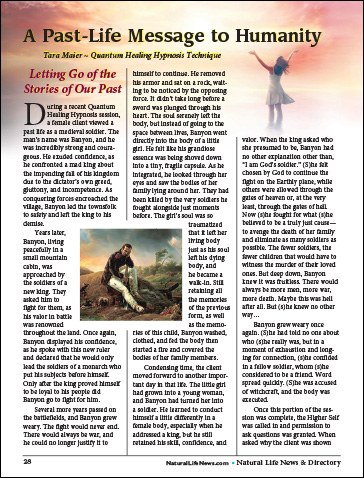